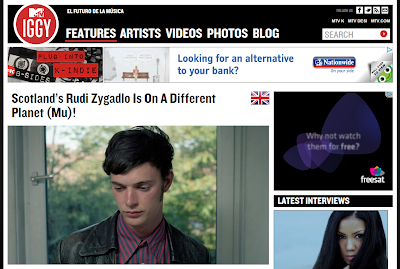 Words and Interview by James Walsh and Joseph JP Patterson.

Following the release of his Great Western Laymen debut album on Planet Mu, Dumfries-born Rudi Zygadlo uprooted to Berlin for the best part of 18 months. However, rather than immersing himself in all of the electronic dance music that the city has to offer, the Scottish musician drew on other influences – writing the majority of his intriguingly-named follow-up, Tragicomedies, while on Europe’s mainland. Continuing on from where his debut left off – with its literary references, but stripped of its more overriding dubstep elements – his sophomore effort is more evolution than revolution. From speaking with Zygadlo, it would do him a disservice to fall into the trap of trying to make sense of his music by comparing him to artists of a potentially similar ilk.

As an aspiring artist, who did you grow up listening to?

I listened to a lot of Frank Zappa when I was younger. While I still listen to him, I don’t listen as much as I used to. I’m into a lot of classical music at the moment, as well as some lesser known '80s pop, the likes of Les Ritas Mitsouko and their album, Mark and Robert. I don’t particularly like referring to other artists, as I end up fighting to think of someone to say, and then afterwards, I don’t know if they actually matter in regards to their influence on my own work.

To somebody who has yet to hear it, how would you describe your music?

It depends who’s asking, but I tend to fold up and not try to describe my music. It might be away from things they don’t know about, but I suppose there’s a palette of dubstep – though less with this album – with strong poppy structures, string jangles, piano vamps, but then also a focus on strange modulations and being bass-driven. You could say it’s obscure pop, with jazz and classical elements.

And what inspires your songwriting?

Literature. Writers like Beckett, Bulgakov and Thomas Pynchon. There are a lot of odes to Greek mythology on the new album, and one idea I had for the album was to write a song about each of the nine muses, but it didn’t unfold like that. I suppose I turn to the conventional things, like love and closure – as everybody does – and I enjoy creating pastiches to poppy songs. I’m passionate about making music but when it comes to writing lyrics I just think, ‘Fuck!’ I find they can often be quite cringey, but it’s also a case of drawing on incidents from my life and then constructing them in a way that’s emotive and at the same time makes the listener think deeper about what they’re hearing.

The new album is called Tragicomedies. Where did the name for the album come from, and what’s the meaning behind it?

It may seem like an ode to plays or to Shakespeare, but it’s no specific reference to theatre. It just seemed to be an umbrella term for the content of the album’s lyrics. The writing process is very nostalgic. In looking back on events as I wrote the album, my memories have become compartmentalized into tragedies and comedies. Though, I suppose making sense of the moments when writing lyrics is like creating a dramatization to music.

In what ways does it differ from the last album?

There’s certainly less dubstep on the album and more influence from 20th century music that can be classified under the umbrella of classical minimalist. The electronic and bass feeling is definitely still there, and the sound combined with the lyrics definitely gives it a sense of now.

Did writing in Berlin have any effect on you musically and determine the way the album sounds?

It’s hard to say if living in Berlin for a year and a half had an effect on the music. It doesn’t particularly strike me as a homage to Berlin, though lyrically it does deal with events there. I don’t know if it would differ if I was living elsewhere or back in Scotland, but there was no conscious effort or effect from the city. The first album was all written back in Glasgow, in the space of just 3-4 months. This was a very different process. It was much slower this time and didn’t role off the tongue as easily. I probably used up all of my original ideas on the first album, so I had to search deeper to not revisit themes.

Who do you hope Tragicomedies resonates with and what do you hope people take away from listening to it?

I hope it resonates with everyone, but that’s not going to happen. I think it’s important that people see and listen to art and music beyond that which is trending. It’s not that obscure, really, but people might need to listen to it more than once. I hope people don’t try to categorize it and hear the innovation instead. I’m always disheartened when people compare one artist to another, I just think that it’s important to try and not hear anybody else but see a piece of music on its own merits. I hope people can do that with Tragicomedies.

Finally, what’s the aim over the next few months now that the album is out there?

I’m going to be doing some more writing and we’re looking to tour Tragicomedies. We’ve got a band semi in place, which is sounding pretty good, and we’re playing in London soon. It’s in its fledgling stages and, as with anything, there are obstacles to overcome but we’ll be definitely going ahead with it. I’m very much looking forward to getting out there and playing the songs.