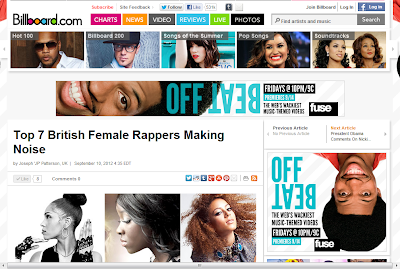 Since its birth in the 1970s, hip-hop has been dominated mostly by men. Along the way, though, we've been blessed with some strong females who like to rock the mic, too, and even best their male counterparts.

From Roxanne Shanté to Nicki Minaj, each female rapper has brought their unique flair to hip-hop. Missy Elliott showed she was, and still is, ahead of the game the minute she entered the rap scene in a space suit, whilst Lauryn Hill effortlessly integrated soul and reggae in her rhymes with her first studio album. So we all have to praise the female of yesteryear for changing the game, allowing females in music to have a loud voice and not take no for an answer.

Much like the aforementioned queens of rap, the U.K. also has its own sisterhood, with artists who like to go hard in the booth. Allow The Juice to introduce you to the top 7 British female rappers who you should keep an ear out for.

Sound: "Hard, emotive, full of bass and crazy melodies. I like to call it 'orgasmic energy.'"

Inspiration: "The first time I heard Missy Elliott, I was just totally blown away. I was like, 'This just sounds so sick!' She just looked as if she was having so much fun with it, the videos were so animated and out of this world - from that point, I was sold. She totally motivated me to want to bring that kind of energy to the UK music scene."

Female Rappers: "I definitely feel there's a lot more desire to see females in hip-hop today. When I first got in the game (2005), I used to feel the male barrier -- people would look at you at on stage at clubs like, 'What the hell are you doing? Get the fuck out of here!' I think with the success of artists like Lil Kim, Eve, Missy, and now Nicki Minaj, Azealia Banks and the influx of UK females, there's definitely a lot more support -- especially in the UK. This also might be to do with the rise in female power around the world in general.

Future: "Well, my music style is very diverse and my image is a mix of high fashion and urban/street, so I can see myself representing UK music in countries all over the world but also getting heavily involved in fashion. I design my own clothes and have featured at London Fashion Week. I walked at New York Fashion Week for designer, Stevie Boi. I'm totally focused and 100% working towards being one of the top music and style icons in the world. Period."

Female Rappers: "I think it is gradually getting better and males are accepting female rappers more. Before, it was very rare to see a female rapper doing her thing and actually be good at it, instead of just exploiting their body to sell records. People are more for the talent now instead of the image, which was a greater deal before then it is now. "

Future: "I plan to take my music career as far as possible, and I'd like to do some more acting and producing. I've set up my own record label, Gutter Strut, so I want to be signing talented people to develop and launch my merchandise to the masses. I also want to own a restaurant and build youth centres for kids."

Sound: "Pretty fluid and changes depending on my mood. I like to experiment and rap on everything from hip-hop to reggae. But whatever the genre, I always try to make sure that my sound bangs."

Inspiration: "My early influences were Salt-N-Pepa and TLC, and I've also been massively inspired by the likes of Jay-Z and Lauryn Hill, as well as old school reggae artists, like Bob Marley and Gregory Isaacs. Growing up in south London, So Solid Crew were a massive local influence, seeing them come from the same area as me and then ending up on TV was like, 'Wow! Maybe my music can do that!'"

Female Rappers: "I think the hip-hop world has always embraced female MCs, with the likes of MC Lyte, Queen Latifah, Foxy Brown, Da Brat and more recent artists like Nicki Minaj all having their time. It's been the UK that has taken a while to get to grips with the fact that there are talented female MCs with a lot to offer. I think the reason we are finally being embraced over here now is because we have forced the recognition. In the past two years, female MCs have made so much noise and so much good music that people have had no choice but to take notice. I feel proud to have been a part of this movement, because it's definitely been a pivotal time for hip-hop in the UK."

Future: "In the next five years, I hope to have delivered a stand-out album that defines this blossoming era of female rap in the UK and that also stands the test of time on a wider scale. My main aim is longevity and to keep delivering memorable, timeless music."

Sound: "Hard, raw, British, edgy and honest. It's basically RoxXxan as a person, but through sounds. It represents my personality -- from Mikey J's crazy productions to my tongue-in-cheek lyrics."

Inspiration: "When I was younger, it was artists like Nenah Cherry, Lauryn Hill, Dizzee Rascal, Missy Elliot and Busta Rhymes. These artists have more than just songs; they have a unique identity and sound."

Female Rappers: "I don't think the hip-hop scene has become friendlier towards the ladies, I just think that the ladies have started playing by different rules. We just haven't had such strong female rappers since your Lauryn Hill's and Missy Elliott's and Lil Kim's. That's why everyone is so excited about it now -- it seems more "female friendly" because, now females are allowed to be more than just sexy, they're hard as well. They can bar and flow like the guys and are better than a lot of them, too."

Future: "In five years, I want to be an internationally-known artist, selling out tours, making hits and still working hard. I want to be seen and respected as a female rapper and an all-round artist. Hopefully by then, 'Backpackgang' will be a worldwide thing, and I'll still be loving what I do."

Inspiration: "I was inspired by the likes of Lauryn Hill, Missy Elliott and Ms Dynamite -- they were creative and, as a young female, Ms Dynamite taught me about having morals and self-worth, so it was beyond music."

Female Rappers: "Back in the day, you had so many females in hip-hop: MC Lyte, Lil Kim, Foxy Brown, Eve, Remy Ma and Lisa Lopez, to name a few. They all did their on a commercial level, but now there's seems to be only one female rapper dominating, and that's Nicki Minaj. Although there are so many female rappers today, it feels a lot harder to push through on that commercial level."

Future: "I'd love to be able to open doors for other musicians, or even just inspire people's lives. I'd love to take my career beyond boundaries and hopefully through my musical journey learn a lot about what life has to offer. Five years from now, I will definitely still be doing music."

Sound: "Experimental and hard-hitting, with a good balance of old and new school hip-hop."

Inspiration: "Big L, Lauryn Hill, Nas and predominantly East Coast rappers. It's the music I grew up on and could relate to, because it's about real life."

Female Rappers: "America has always been accepting of female MCs, I just think the UK is starting to catch up now."

Future: "I want be at the top of my game. I want to be the most successful female rapper to come out of the UK. The next few years for me is about taking it to that next level and kicking down doors, making as many opportunities as possible and not dreaming small when it comes to projects. Look at the likes of Jay-Z and Pharrell, they've built empires and not just within music -- that's the road I'd like to be on."

Sound: "Eclectic story-telling. I'd say that I'm a mouthpiece for females."

Inspiration: "Absolutely no female MC has inspired me to do music. I can see why people love some of them, but no one has really grabbed me like that, personally. Eminem, though, now that's a different story. The way that he tells stories, the way the he constructs his bars, it's just amazing."

Female Rappers: "It's a lot more friendly for us female MCs now. I think it's because females are generally more accepted in the world. Beyoncé wasn't lying, yo. We'll soon run the entire thing."

Future: "I hope to mean something to a little girl in India who sells fruits and vegetables in the market (laughs). I never really like time scales, but I just hope that I'm happy and I've done everything that I'm supposed to do five years down the line."

This also appeared over at Billboard: H E R E