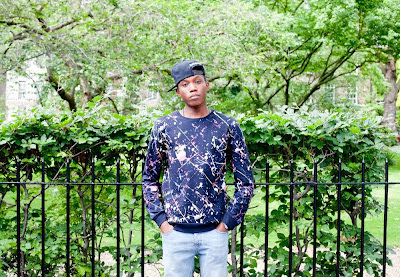 Maxsta, a rapid-fire MC from east London, released his first mixtape—appropriately titled "The Maxtape"—in summer 2010, at age 18, and has been steadily building an impressive résumé in the two years since. Prized for his emotional bars and clever wordplay, the young lyrical mastermind has gained a decent amount of fans from his work within London's underground circuit, namely the grime music scene. His first release on Just Jam/Sony RCA, "I Wanna Rock," will determine if he's ready to conquer the pop world (we're betting yes).

FIRST MUSICAL STEPS: When I was younger, I was a bit of a musical wild card. I played loads of different instruments: the cello, the piano, and I even had guitar lessons! I've always liked music, even before I knew that I wanted to be an MC. I started listening to Kano and Dizzee Rascal and thought, "Yeah, I want to try this out myself."

MAXSTA AND GRIME MUSIC: No matter what I do music-wise, grime will always be the foundation behind everything. I cemented myself within that grime world and it will always be a part of me; everything else I do will rise from that. Do I still class myself as a grime MC? Well, yes and no. Yes because I can do a grime tune—I can always do a grime tune—but no because that's not all I can do, and that's what people are going to realize when they hear my new music.

MY SOUND: I make so many different-sounding things. In terms of my sound, people always ask what the "Maxsta" sound is, and I guess it's the way I spit, the way I flow, and the things I talk about. I talk about a lot of issues. No one can talk about my life apart from me, and that's what makes me an individual.

WHY TO LISTEN TO MAXSTA INSTEAD OF ANY OTHER MC: Everyone is an individual, and everyone talks about their own life. The thing with me is that I have grown up in so many different places and listened to so many different genres of music. As a kid, I listened to rock music and liked skateboarding, but then I would change into something else. I'm a really diverse person, and I feel like I've had a lot more experiences than just your average artist.

ON BEING SIGNED WITH JUST JAM/SONY RCA: I've known Jamal Edwards [who heads up Just Jam] for a while, but it was more of a case that my manager brought it to my attention. I never really had any initial conversations with them, but I must have done something right to impress them!

ABOUT THE NEW SINGLE, "I WANNA ROCK": It just stood out from the rest of the batch. Even while we were in the studio, it just seemed to scream at me that this was the right one to lead with. It was all about the vibe, and it felt right. I want this single to keep me elevated and keep me in the direction that I want to move in. I want it to kick off the wave! I want people to expect some really strong albums from me. My focus is my music from here on in.

A version of this appeared over at Interview Magazine: H E R E
Posted by Joseph 'JP' Patterson at Monday, July 02, 2012