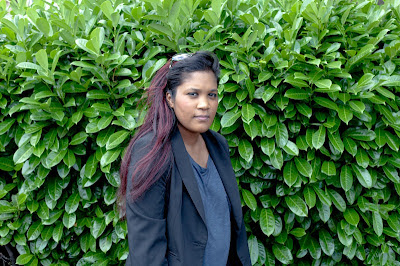 Cooly G, the producer, DJ, singer, and semi-professional footballer from south London—oh, and she's a proud mother of two—calls her brand of UK bass house music "deep, sexy, and dramatic." Merissa Campbell, as her family and friends know her, got her first taste of success when Hyperdub signed her "Narst/Love Dub" productions to their well-respected independent label back in 2009. Since then, the beat-maker has performed around the globe and recorded a debut album, Playin' Me, out this week in the UK—and with a swath of laudatory British press behind it, we have the feeling it's only a matter of time before Cooly G arrives Stateside in a big way.

STARTING OUT: Music has always been in me. Growing up with parents who loved everything from reggae, dub and rare groove soul, to acid house, hip-hop and jungle made me into the eclectic music lover and maker that I am today. Influence-wise, I'd have to say artists like Bob Marley, GangStarr, H-town, and Mica Paris were some of the main people.

FATHER KNOWS BEST: My dad had a little analogue set-up in our family house, and when he would have sessions, I'd always chill with him. I was a true daddy's girl! I was just amazed by the sound system days when they would travel around and play out. When I was seven years old, I used to sit on the wall overlooking the petrol station, and me and my mate, "Slimz," would ask people to let us wash their cars for money. When I saved up enough money, I bought some decks, mixers, and vinyls, and took some speakers from my dad. My first vinyl was by 5 star. [laughs]

WORK-LIFE BALANCE: I just make sure that my wonderful, amazing children are fully taken care of, and I deal with them first. As long as my kids are good, healthy and happy, I'm happy. I still somehow manage to squeeze in Cooly G time. [laughs]

RECOMMENDATIONS: I'm fully in love with DJ Gregory; I always have to mention him. I also like KariZma, Diplo, Havoc, Burial, and, of course, Kode9—whose new tune is dramatic, oh gosh! To be honest, I just like chilling out to a lot of music from back in the day.

DREAM COLLABORATIONS: It's really hard but if I had to name a few, I'd say Missy Elliott, because she has been such an inspiration. Snoop Dogg, because I love his voice and his style—plus he looks like my older brother. [laughs] Another person would be R. Kelly, because I think we could make sweet music together, and the video would be hot! I'd like to work with a lot more, to be honest, but those are the main ones.

ON MAKING THE ALBUM: I was on tour back and forth so I just recorded and produced what I could in my spare time. It then became a mini-journey of things I had been through from the year that my son was born—like little situations I experienced—it wasn't a planned idea, it just all fell into place and I enjoyed every bit of it. I taught my son how to engineer my vocals, so he helped me on a couple of tracks while I was pregnant with my queen. It's amazing to know what I've done; just expect something a bit more than my previous releases and enjoy the ride.

UPCOMING PLANS?: Well, I have loads of things currently being arranged: more releases from my own label, Dub Organizer, as well as trying to get into soundtrack production. You can also expect to see me doing a lot more live gigs, and just generally enjoying what I do best—which is just being me!

COOLY G'S NEW ALBUM, PLAYIN' ME, IS OUT IN THE UK NOW. FOR MORE ON COOLY G, CHECK HER TWITTER.