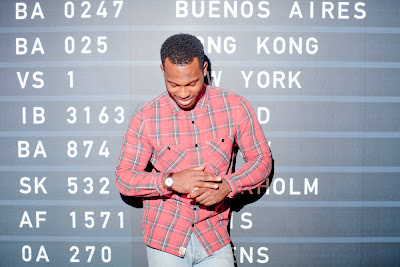 Josh Osho is a soul singer whose pain comes through clearly in his delivery—which isn't easy to come by in today's heavily manufactured music world. From selling drugs on the streets of south London to performing on Later... With Jools Holland, the 20-year-old rising star's life has thankfully changed for the better. Recently supporting both Emeli Sande and Rizzle Kicks on tour gave Osho the chance to be exposed to different audiences—preparing him for the big, bad music industry. But he is now ready and determined to prove that his take on soul music is the way forward.

ON HIS START IN MUSIC: I knew when I was around 14 that I wanted to have a career in music. Simon & Garfunkel influenced me a lot, their songwriting ability, the way they were able to draw from so many sounds so fluidly, it was amazing. Lauryn Hill, Donnie Hathaway, Ben Harper, and Nick Drake also played a big part, and then I really started getting into 1920s-1950s blues. I was heavily into my hip-hop, KRS-ONE, Mos Def, Fugees, etc., and I still am today.

WHAT MAKES YOUR SOUL STAND OUT?: I guess that's for you guys to say, but I put a lot of myself in what I do. When I'm inspired, it's captivating. It takes me by the scruff of the neck and possesses me to do things beyond what I could ever personally take plaudit for, which is a beautiful thing. I try to give from the heart.

SIGNING WITH ISLAND RECORDS: I had written the album's core, so I started courting publishers. One amazing guy by the name of Alan Pell loved what we were doing and he passed it on to the MD of Island Records, Darcus Beese. He listened to it and within a matter of days, it was that time!

STAYING GROUNDED AT 20: I'm a young one (laughs). I just think it's important to stay close to the truth, the truth of who you are, the truth of what you want to achieve in your life, and with that in your heart, I think you can stay on course. For me, family is a big thing. I've had a lot of madness with my family, but we are still holding on in there. There's a lot of real deep love, we've dealt with a lot together and they're the major reason that I'm here doing what I love. They're not afraid to give you a slap on the neck-back when you try and get too nice (laughs).

WORKING WITH GHOSTFACE KILLAH AND CHILDISH GAMBINO: No words can explain what it was like working with Ghostface Killah, he is a phenomenon—as a creative, as a man and as a visionary. Wu-Tang Clan are legends, so having the blessing to work with him was great, and I felt like we really connected. Working with Childish Gambino was also an amazing experience. Besides his obvious talent, he had a great energy about him and came across as a proper genuine and driven person. He has an insatiable ambition, but humility as well. Other artists I'd love to work with would be Mos Def, Common, Joe Budden, J. Cole, Lauryn Hill, Stevie Wonder, Chris Martin, and Adele.

CAREER HIGHLIGHT: My career highlight so far has to be having written my first album and hearing it fully mastered. It's such a daunting but really proud moment finishing my first body of work to share with the world. I was blessed to have had the inspiration to take part in that kind of moment. So much time energy and heart was poured into it, so now to be able to share some of the magic with the world is something so crazy!

WHAT FANS CAN EXPECT FROM OSHO'S DEBUT ALBUM, L.I.F.E.: People can expect something sincere. It's difficult for me to even begin to try and summarize what my first album is about, because when I was making it, I just sat down, pen in hand, and surrendered everything that I felt and imagined—every experience, every perspective. I felt out of control for so much of it, so I guess that I've managed to encapsulate 45 or so minutes of the sounds and words of my soul.