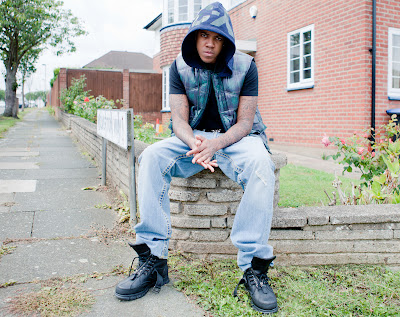 At just 21 years of age, Chip—formerly known as Chipmunk—has accomplished more in his short career than many twice his senior. The rapper from North London, who started out spitting bars over grime beats, got into music at the tender age of 14 and was inspired by some of hip-hop’s finest: Jay-Z, Kanye West, Lil Wayne, Juelz Santana and more. But with over five well-received mixtapes, two chart-topping albums in the UK and countless hit singles under his belt, Jahmaal Noel Fyffe—as his family knows him—is inspiring a whole new generation of rhyme-lovers all by himself.

XXL caught up with the MC, who has worked with big-hitters like Chris Brown, Keri Hilson, Trey Songz and Mavado, to discuss signing to T.I.’s Grand Hustle Records, plans for global domination, and a whole lot more. Act like you know! —Joseph ‘JP’ Patterson

On hooking up with T.I. and how the deal with Grand Hustle came to fruition:
How it came about was I became locally known as a free agent in the UK I kinda felt that for me to be the artist that I want to be. I was going to have to work around the UK to become bigger there. I felt like I hit a glass ceiling—well, either I hit a glass ceiling or a glass ceiling was placed over me—on how far I could go being an artist that just wants to rap. I feel the culture in America has a lot more respect for the verse. In terms of singles, obviously your choruses sell your songs, but in terms of respect for a rapper, there’s a lot more respect in general for a verse in America. So my manager had been speaking to a guy called F.A.—who was one of the founders of Red One and put the Lady Gaga project together—and he had a few people in mind, in terms of people that he thought I should see, and one of them was T.I. We met, we clicked straight away and the ball has been rolling ever since.

On what really happened with the Sony:
You know, there’s no other term for leaving a label that is as glamorized as ‘You got dropped.’ What happened was Jive in the UK got closed down and there was a slight… I wouldn’t say it was a battle, but a higher power trying to force my hand, in terms of going with another roster under Sony. They wanted to move me over to one of the different rosters under them but I didn’t feel that Sony was the home for me anymore, in terms of being a young black rapper. I think the problem with A&Rs in England is that the vision I have for myself is one they don’t have for me. I personally believe that as long as I speak the English language, there shouldn’t be a reason why I can’t break the world as a rapper. It’s funny, now I have an infrastructure and a team behind me that think I can, so hopefully if everything goes to plan. God willing, I’m gonna work hard and just go for it.

On what other UK artists he feels has the potential to crack the States:
It just depends what path you want to take. I feel Tinie [Tempah] has definitely made some noise over here with his “Written In The Stars” single, and I feel that the path that I’m choosing to take is coming from the ground roots up. T.I. told me that we could re-do “Champion” if we wanted to, but I chose not to do it. I want to do everything from the grass roots up. I feel that once someone can officially break down the accent barrier, I feel there will be a lot more UK artists that have what it takes to give everyone in the States a run for their money. Live shows, bands and festivals are part of our culture so, in terms of the artistry, we’re there—it’s just that star quality, and I feel a few of us definitely have that, so shout outs to Tinie, shout outs to myself and shout outs to Wretch 32. In terms of singers, I don’t think I have to name any because I don’t think singing has an accent, so shout outs to Adele, shout outs to Jessie J and shout outs to the young pretty thing, Rita Ora.

On his style of music for the people not yet in the know:
To the people that are yet to discover my music in America, I would say it has been a sound traveling journey. However, I want my genre to be my voice; I just want to go in. Just like you would listen to your favorite rappers and say, “He goes in,” I want you to have that effect with me. Not, “He goes in for an English guy.” I just want, “He goes in!” So any opportunity I get to go on a track with one of your best rappers, I will be aiming to, you know, go in! [laughs]. My musical style and genre, well, I don’t want to be genre specific, but if urban was a sound then I would say urban, but I kind of sway between crossover hip-hop. I started out with grime, I had some pop hits, I’m really into bashment and I had a No. 1 tune in Jamaica, so you need to check out the youtube.com/ChipTubeOfficial and then we can go from there.

On his career highlight thus far:
I would say it’s been the beautiful struggle. The moments you don’t see: not having plaques or winning awards. It’s the moments where I beat myself up and look out the window and think, ‘How am I going to get to this next level I’m trying to get to? How am I going to fix these loop holes in my circle? How am I gonna one day become that global star?’ I’m 21 and I hear Drake saying, “25 sitting on 25 mil”—I see it as there shouldn’t be a reason why I can’t say the same thing at 25. So yah, that’s been the highlight of my career, the beautiful struggle.

On what plans Grand Hustle/Hustle Gang have for Chip for the rest of 2012 and beyond:
Between the collective of Grand Hustle/Hustle Gang, I would say the objective is to transcend Chip the artist and the brand into a global phenomenon that isn’t critiqued by an accent barrier. First thing you will be hearing from me, the first official representation of me as a Stateside look, will be the mixtape, Chip: London Boy, so look out for that. I promise, it will impress you all!

This also appeared over at XXL: H E R E