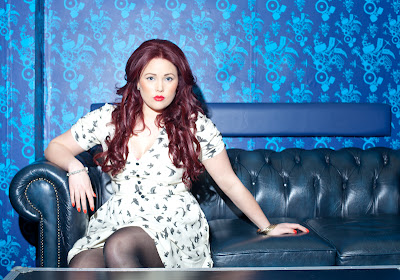 "Working with Pepper suits me fine," says Dizzee Rascal. Pepper, real name Katie Pepper, is the latest addition to the Dirtee Stank family, headed by Rascal, East London's biggest grime export. The singer got her big break when she appeared as a contestant on British talent show Must Be the Music, impressing judges Jamie Cullum, Sharleen Spitari, and—unbeknownst to her then—her new boss, Dizzee Rascal. It was Pepper's soulful voice and confident stage presence that hit the heartstrings of the rapper on the show, so much so that he and his good friend and label partner, Nick Cage, decided to sign the young lady to their major-run independent record label. Although her sound has been compared to Katy B and Adele, Pepper is ready to show the world that she's in a league of her own.

STARTING OUT: I've sung for as long as I can remember. My mum is a singer, not professionally or anything, and she has a wicked voice! I was always around her. My mum listened to all sorts of music, so I grew up listening to a lot of Tina Turner, Meatloaf, and as I got older, I started listening to more soul stuff. I massively got into Lauryn Hill, she was a huge inspiration for me. Then you have Aretha Franklin and Nina Simone. I was really into the big soul singers, definitely. I felt that I could blend in with that sound.

ODD JOBS: I was working in recruitment in Oxford for about five years and I just got to the point where I was like, "Fuck this! I can't do this anymore." I didn't really know what I wanted to do, though. I just never thought that music was a viable career for me. Went out for the ski season and then when I got back to the UK, I knew that I wasn't willing to do another desk job. I wanted to do something within the music industry, but still didn't have aspirations to specifically become a performer. I just wanted to work in the industry and be around it.

ON SIGNING TO DIRTEE STANK: I did the Must Be The Music show on Sky 1 and Dizzee [Rascal] was a judge. He and his manager, Cage, were actually at the auditions at the Hackney Empire. We didn't win the show, but the guys got in touch. I don't think he intended to be my manager and they weren't intending to sign me on the label, but he just took me under his wing. The show wasn't like The X Factor, there wasn't anything set up to go to a label, Dizzee was just an advisory. Then he just fell in love with me, I guess. [laughs] We went to a few labels, but they didn't really get it and how I could I translate from the show, so Cage was just like, "Fuck it! We'll do it."

THOUGHTS ON THE UK MUSIC SCENE:  I think it's a really exciting time for UK music. It's really getting out of the UK and I think the type of music that we're heading, in terms of female vocalists, there aren't any that have my angle. You either have the Adele types with beautiful songs or you have the more poppy end, but the music that we're doing, people can jump around and mosh. Obviously, you've got Katy B but I think we're very different.  I do get compared to Adele and Katy B a lot and I do see why people would compare us. When people hear the music and it gets out there, people will realize that it's not a direct comparison, but I get why they say it. There aren't really any plans to work with anyone at the moment. I've done some stuff with Dizzee, but we want to keep it totally Pepper for the first album so that I can really establish myself.

DEBUT ALBUM AND FUTURE PLANS: Because of the way we made the album, it wasn't like we sat down and said, "Let's write a song like this," it was just because of the creative mood that we were in. It wasn't a traditional writing session in the sense of sitting down with a guitarist or a pianist and writing lyrics to them. The tracks weren't made before I came in the studio to write lyrics. We created it all together. Each song has got its own sound to it, depending on what happened in the studio that day or how we felt. I feel like each track is an extension of me and my personality, or a story. Cage has produced the whole thing and it's got this nice sound. It doesn't sound like a mad mish-mash. I'm currently supporting Rizzle Kicks on tour, so we've literally got the last few dates of that now. After the tour, it's time to plan the first single! I would love to say it's finished, but I can't. The album is definitely gonna be out later this year, though. There's also a lot of acoustic stuff that people can listen to.