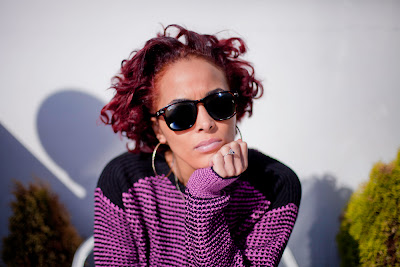 Hailing from Brixton, south London, Russo is about to change the way the world views pop music coming out of the UK. Mixing her hypnotizing vocal and straight-to-the-point lyrics with edgy dubstep and electro productions—courtesy of her favorite beat-making outfit, Yo Video—this 25-year-old songstress is thankfully injecting some cool back into a scene that has lately been filled up with a load of talent-show rejects...

BEGINNINGS: I first started doing backing singing for a singer called Ayah Marar – who is a friend of mine – and I just did it for fun, really and truly. I enjoyed it, but I never really took it seriously. Through her, kind of in an accidental way, I got in touch with her friend, Ali from Yo Video – who was also someone that I went to school with – so it was just like bucking up with an old friend. Ali and Jamie, who is also part of Yo Video, have always been producing and they were making beats, and they just wanted to do a song to try something out. So I went to the studio, fiddled about with a few ideas and 'Fool' came out of it. From there, it was just something I was doing on the weekend or when I had time, because I was waitressing and still had a full 9-5. I was excited about doing something different, but I never really thought anything would come from it.  Them lot were on doing a video and were like, 'Come on, it would be sick!' So, basically, we put all of our money together and spent about £500 on making a video for 'Fool'. My friend, Isaac, did the video and it was all filmed in my house and on my road – all local and cheap. Considering how much money we spent on it, it came out pretty good (laughs). We put it up on YouTube and bish, bash, bosh, people started knocking our door. It was a bit crazy! It all happened by accident. Yo Video, they’re really into their music and I think they knew hand-on-heart that they could say, 'Yeah, we had a feeling it was gonna be something.' But with me, I was just like, 'Whatever, you lot', but it actually worked.

EARLY MUSICAL INSPIRATIONS: When I was growing up, I loved R&B. I was really into TLC, Mary J Blige, Aaliyah and all of those kinds of artists. Biggie and Tupac as well. I was always big on American rap, like when Mase came out. It’s weird now because the word ‘urban’ doesn’t really define the music that used to be urban. Urban has kinda spread now, and it’s basically a form of popular music. When use the urban term now, it means a lot more different genres of music. It’s like pop music, not many people want to be a pop artist but, at the same time, everyone wants to be popular. That’s basically what it is.

ON HER MUSICAL STYLE: I make intelligent pop music. Not in an arrogant way, but my music is thought about. I don’t want to just put throwaway music out there and just call it bubble-gum pop, or whatever. These are songs written, produced and made with love, it’s not like someone just comes in and says, ‘This is the theme of the album and this is what you’re gonna do.’ It’s not like that; it’s not controlled in that way. In everything that myself and Yo Video do, we do it together. I want to build a sound. Not to say that I'm not influenced by loads of things, because I am, but there are a lot of songs on the album that sums up loads of different things.  I know a lot of people are going to class me as an urban artist, but I’d like to call it intelligent pop. I could say urban because that’s probably where all my influences come from, but I like a lot of things. I like a lot of good music in general, so I don’t really want to say that I’m about one particular thing because then it’ll feel like I have to stick to that and I wouldn’t be able to change my mind when I want to.

NOT BLENDING IN: I stick out because I know where I want to go and I know the things that I want to do. That’s why I don’t like to say that I make one particular kind of music. There are a lot of people who feel that I’m a dubstep artist because of ‘Bad Tonight’ and ‘You Changed Me’. I'm just not afraid to try new things and I don’t want to be in the same lane as anyone else, and that’s probably what makes me different. Without being rude to other people who just stick to whatever genre they’re in, do what you’re good at, but I want to try other things.

KANYE AND KELIS: Everyone says that they want to work with Kanye; I know they do, but I would love to do a song with him because he’s crazy! I’d like to meet him. Kelis as well, definitely. She puts me to shame with her madness (laughs).


ON BEING CALLED “A GHETTO VERSION LILY ALLEN”: Yeah, that was quite funny. When I read that, I said to my manager, ‘What the fuck?’ I just didn’t get it. But what he said was that I’m not afraid to say certain things, like Lily Allen, and I’ve got a bit of a mouth on me. I thought it was alright after a while (laughs). Lily Allen is a successful singer and she has come a long way. She’s a character, as well as a singer, whereas some singers don’t really get to see them being 100% real. You don’t want to be forced to get to know someone but, at the same time, it’s nice when a singer has a personality and that’s why I love watching people like Adele getting interviewed – I think she’s brilliant! She’s so real and that comes across, whereas some people just say the same thing over and over again and you can tell that they’re being controlled or told what to say and do. That’s boring.

PERSONAL STYLE: I wanted to look different, but Rihanna came and killed my game (laughs). I had my hair died a long time ago, as in way before Rihanna had red hair time ago. I've always died my hair; it has always been different colours. I like people who wear what they want to wear and not what’s in fashion. I might not necessarily like it, but it’s a confidence thing and how you feel about yourself. I stopped wearing trainers and tracksuits a long time ago. I remember I woke up one morning – this must have been a few years ago because I'm 25 now – and must have looked in the mirror and thought, ‘I don’t actually own any tracksuits any more’.  My life has slowly filtered out clothes like that; it’s actually a bit weird. Most of the time, my daily wear is Converse. I'm a Converse girl and I like my jeans and a T-shirt’s. But when I go out, I always wear heels. I hardly go out any more, though. So yeah, my style is just really casual, but I don’t wear trainers. I should say I own a pair of trainers to go to the gym, but I don’t go to the gym (laughs).

THE DEAL WITH POLYDOR: That happened because we had a few meetings and we explained to them what we wanted to and how we wanted to make the music come across etc. I have really strong opinions about what I will not do and what I will do, and that had to come across straight away. For me, it has to be a natural progression and that’s why I feel like the videos we do together, they have to represent me. I can’t just suddenly sign to a label and then I'm doing dance routines. That’s not me. I feel like I have to have quite a lot of control and Polydor were free to give us that control. They were just like, ‘We like what you're doing and we don’t really want to change it.’ With the ‘Bad Tonight’ and ‘You Changed Me’ videos that we did, we came up with our own ideas and concepts.


WHAT WILL THE DEBUT ALBUM BE LIKE? I wanted my album to have a sound. I wanted every song you hear to know that it was us again. You can have an album and, even though it’s banging, it might just end up sounding like a mixtape because it’s made up of loads of different producers. But this is going to be my first album and I want people to know what Russo is about. A bit like what Kelis did with The Neptunes, I know exactly who she is now. I remember when her album came out and I was like, ‘Who the fuck is this?’ Not as if to say I would compare myself to her, but I’d like to have the same impact like when she first burst out on the scene. I didn’t know if Kelis was an R&B artist or whether she was a pop artist, I just knew that I liked her and I liked her music. I want people to feel the same about Russo’s music.


A version of this appeared over at Interview Magazine: H E R E