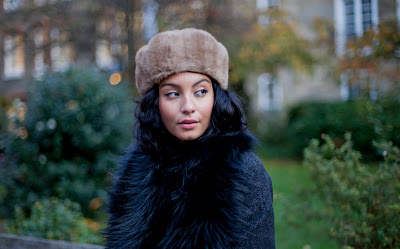 From DJing for chart-toppers such as Eve and Pharrell Williams, to topping the charts herself, Yasmin Zarine Shahmir has made the tough transition from DJ to singer a successful one. Getting snapped up by Ministry Of Sound/Levels Entertainment in 2010 meant that the hip-hop socialite now had the backing to go out and be not only seen, but also heard. Being immersed within the UK's underground/bass music scene has helped Yasmin to know exactly what people want to hear on a grassroots level, but she also knows how to keep the pop blogs happy with her mainstream edge—a balance demonstrated perfectly in her latest Ms. Dynamite-featuring, Shy FX-produced single, 'Light Up The World'.
AGE: 22

FIRST FALLING IN LOVE WITH MUSIC: Probably when I was 17 and I had a friend who was a DJ and was just chilling in the booth, and I wanted to pick songs and have a shot. I just wanted to have a go at spinning so I asked, "When are you gonna let me have a go at spinning this thing?" After that, I realized just how much I loved music.

MUSICAL INSPIRATIONS: Lauryn Hill, Bob Marley, and artists who are really lyrical. I'm very into my lyrics. I'm into great melodies and I like a good message in a song, great writing, and having things to say. There's a songwriter, Andreya Martin—she's an incredible writer.

MUSICAL STYLE: I like to call it "trip-hop soul," because there's a lot of hip-hop soul, like back when Mary J. Blige started singing over hip-hop beats, and I like to think that I sing over different kinds of beats to other people at the moment. It's got that real '90s edge and I'm really inspired by that kind of '90s style, so I try and take inspiration from that and gave it something fresh. There are a lot of hip-hop tones, a lot of reggae and jungle tones, too. I'm really into my soul and R&B as well, so that's what I try and get across in my music.

ON WHAT MAKES HER DIFFERENT FROM EVERYONE ELSE: I try and think I'm dissimilar because I've been DJing for 5 years and that obviously helps me in so many ways. When I'm in the studio with producers, I'm able to control certain things. I've got about 20,000 tracks on my laptop from where I've been DJing, so it's just great to have that memory bank of stuff.

THE TRANSITION FROM DJ TO SINGER: I get asked that question quite a lot, and they make it sound like it was a big turn, like I'm a DJ and then the next minute I'm a singer. It was never like that. A-Trak and Armand Van Helden are both DJs, but they're also huge producers in their own right. Every DJ will get that urge to create when you're being around all this music all the time. I guess that same thing happened to me, but I love a great beat. I don't play house and I don't play minimal, I've always loved hip-hop, R&B, and more of the old school funk and soul stuff. For me, it just felt natural to write songs, and I enjoyed singing, it was something that I like to do. I played around with the ideas of writing songs, it just felt like the most natural fit to start doing it at a time that was right for me and a time that I wanted to experiment with putting stuff together.

ON GETTING SIGNED BY MINISTRY OF SOUND/LEVELS ENTERTAINMENT: Well, it was about November in 2009 when I started looking for a manager and started going to the studio. Before, I had never actually walked into a recording studio. I looked at some stuff with some producers, and I think I was a bit naïve, and I didn't really know what I liked. Well, I knew what I liked, but I didn't really know what my sound would be and what I was trying to say. In January/February 2010, I went into the studio and we made "Finish Line." When I made it, I just felt like it was me—it was fresh. Shortly after making that song, it ended up at BBC 1Xtra via Twin B. A couple of labels got in contact, but it was Twin B's label that I went for in the end, because I knew him so well, and it was just a really natural process. I wanted to have a team of people around me who I care about more than just business.

THE FEELING WHEN FIRST ENTERING THE CHARTS: It was very hard, because it felt like I was just a number. It was hard to grasp, in a way. It was like, 'OK, I'm this number', there's nothing on paper to say it. The initial happiness was a great thing, to be in the top 40. It's a bit mad when you grow up listening to the charts as a kid and then one day you're in it. But I remember people being like, 'That's great news', and I was like, 'I want to do the next thing.' I find it so easy to look around at other artists and see them with number-one albums and stuff. You feel a bit fickle, I suppose. But then I look back and think about how a year ago I hadn't ever performed live, and I hadn't done any collaborations with anyone, so I have come far. This is all about growth for me, and it's been a tough, but great, year.
By Joseph 'JP' Patterson
This also appeared over at Interview Magazine: H E R E
Posted by Joseph 'JP' Patterson at Friday, December 02, 2011