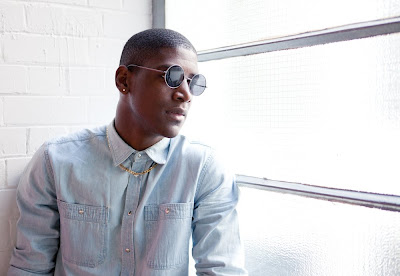 Introducing the man behind Tinie Tempah's worldwide smash, "Pass Out": Labrinth. The London-based musician is quickly becoming one of the UK's most sought-after producers and, now that he is signed to Simon Cowell's SYCO record label, he can add singer to his already impressive musical CV. With a love for everything from gospel to grime, Labrinth's authentic sound is like no other.

HOW HE GOT INTO MUSIC: I got into music through just being inspired by my brother and sisters. They all sing, play instruments and write—and they're very good at it. Being so young and being around them played a very important part in my love for music. Then, of course, church. There were loads of things going on. My dad was a musician and my mum was a singer, so it just goes back generations. I had my start before I was even born, really. When I really got into music, and when I started to produce, I was about 13. I started producing after seeing my brother do it. I would use his MPC, work on Logic Pro and I used to work on Cubase, Reason and other programs, too. Any program that I could find to make music on, I was on it.

After that, I met my manager through my mum—she had so many talented children that she wanted to know a little bit about the business. We went through a few moments where we got scammed—with certain people claiming to be very high in the business, but they weren't at all. A lot of people were just trying to squeeze money out of our family. My mum was just like, 'I need to learn this business; I need to understand how it works.' She met my manager, she introduced me to my manager and said, 'You're gonna work with him!'

ON "PASS OUT": I never knew that the music was going to kick off as much as that because, of course, I made Master Shortie's album previously and it didn't do as well as I expected. But, at that time, I didn't know anything about the music business, I was quite naïve, and I was just making what I enjoyed. By the time I got to 'Pass Out', I learned a lot about writing and producing. I studied a lot, and I would ask people what they know and how I can develop myself, but not lose my individual sound, because it's very easy to get sucked into what's out there and make what's out there to be successful.

After doing my research, I basically made 'Pass Out' loads of sounds on it, had some fun in the studio, and it was like, 'Boom! I can't believe this.' The label didn't even put it out as an actual track that was going to be on his album, they said it was going to be a warm up track for the clubs to see how it goes. That's how much faith a lot of people had in the record. It wasn't supposed to be a hit in the eyes of the label, because the industry was like, 'OK, it's a really cool track, but we don't know how far it will go.' Then it just kept spiraling from there.

MUSICAL INFLUENCES: Of course, success takes you where your character can't sustain you. I'm in a different environment. I'm in a different place. I feel like I've matured a lot, so the stuff that I would make when I was younger was either very gritty hip-hop or soulful R&B—jazz chords, etc. There were always some crazy jazz chords, I still know them now and I still use them but I think I use them a little more sparingly now. I'm a bit more careful about how many jazz chords I throw in my beats, unless I want it to be directed somewhere else. I listened to quite a mix of music: Kim Burrell, Kirk Franklin, Hezekiah Walker, Jill Scott, Erykah Badu, Wu-Tang, and a lot of old school tunes from people like James Brown.

HIS SOUND TODAY: I don't think I've reached the entirety of my vocals. As a producer, I feel that there's a lot more for me to give. But, if I were to explain it, I would just say, "It's music." I don't know, it's just free. That's the only way I can explain it. I wouldn't put myself in a box, because I definitely wouldn't allow it to be that way. I'm not gonna just make house, I'm not just gonna make dubstep. It's a gift and curse sometimes, though, because people like going to people for something. When I listen to a Coldplay record, you're gonna hear an indie band and you know that's what you're gonna get from Coldplay. With myself, I'm not sure it's the same.

SINGING OR PRODUCING?: I have to be honest; I think production is mad exciting because, of course, you're creating the record. When you're a singer, you're just singing. Creating the music, directing and seeing where it's gonna go in production is very, very exciting.

ON BEING SIGNED TO SIMON COWELL'S SYCO RECORD LABEL: There were a lot of labels after me after 'Pass Out' and 'Frisky'—they really loved the records. They heard me previously through my publishing label, because after I signed with them, they sent me around to meet all these labels and introduce my music to them as a producer. They remembered, but hadn't heard much from me. As soon as 'Pass Out' came out, they all went insane and were like, 'Wow! We need to sign this guy.' A lot of people tried to sign me, then at the last minute—I was just about to sign to a label—Simon Cowell came in and basically wanted me as a producer for some of the artists coming off of The X Factor, like, Leona Lewis wanted to work with me. Then they heard my stuff and were like, 'We want you to be an artist', so they put in an offer. I know a lot of people didn't think I was in control when I put out 'Let The Sun Shine', but that was actually made when I was like 17. As I said before, I just want to make music, whether it be commercial or underground. So, I do have the freedom to do what I want, of course, but sometimes fans will not agree with some of the choices I make, or some of the places I decide to go. I just want to have fun.

ON HIS LABEL, ODD CHILD, AND HIS FIRST ACT, ETTA BOND: My plan for the label is to be able to educate artists, as well as helping them to develop themselves—but in an honest way. What happens in the industry, and I even find it myself, is that a lot of us go in quite naïve. We're very good at what we do, but we're not very good as business-minded people. We don't understand the industry that we're selling music to, because it is a business, after all. For me, Odd Child was a way to offer very creative people a better experience of the industry, instead of people not really understanding their music and it totally turning them away from what they really are.

A lot of pop artists usually come out with music that they would have never sung if they were unsigned, and I felt like I wanted to find a way that they could express themselves but not lose that business sense as well. Even my career is like a guinea pig to what I want to do with artists. I want it to be as free as possible. Etta Bond is the first step towards that and I feel like she's already making a great move. People love her face! She has a bad boy voice, man. She was the first artist I worked with, actually, I met her on MySpace ages ago when I was about 17 and we just started working instantly. We had great chemistry in the studio. I've known her for years, but I just think this is the time for her to kick off and get out there.

THE FUTURE: I've got an album coming out early next year, and I've been running around doing a mad amount of shows. I recently did a tour with Chase & Status and I'm going to be doing a tour with Tinie Tempah at the O2 Arena; Nero as well. Then there's going to be a lot of shows and tours following up after. That's basically the plan, to be anywhere and everywhere. I just want to have some fun and keep on pushing this thing as high as it can go.
By Joseph 'JP' Patterson
This is also appeared over at Interview Magazine: H E R E