The Independent: Ear To The Ground - Maxsta 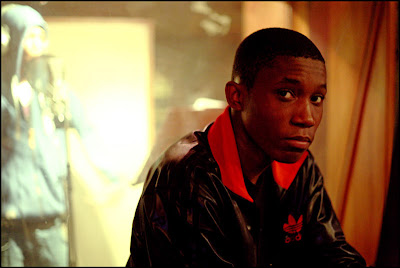 East London’s Maxsta has been causing a stir on the underground music scene for quite some time now, but after recently getting signed to Just Jam Records (a Sony RCA sub-label imprint), this 18-year-old grime MC is out to show everyone that he isn’t just any old ‘average kid’. Joseph ‘JP’ Patterson speaks to the rising star…

Firstly, let me just say well done on getting signed. It’s about time…

Thanks, man. It took a bit long. Some people are thinking, ‘Is it the best thing that you could’ve done?’ but the most important thing about it is that it’s a youthful movement. Me and Jamal (Just Jam Records’ label owner) are around the same age and I think it’s going to be easy to work with him.

Yeah, I think you and him will make a good team! Alright, so how did you get into music and when did you realise that you wanted to make a career out of it?

I didn’t grow up in a musical household, but it’s always been my thing for as long as I can remember. I used to play the guitar in primary school, and in secondary school, I learnt how to play the cello. I’m more of a musical person than people might think. My mum’s got pictures of me performing and rapping at family parties when I was in Year 7. I’ve just always done it. It was never a thing where I thought I’d be a grime MC, I was just spitting in the playground and it was a joke thing; it was just what everyone did, so I did it. But when you make tunes, you get feedback and when people like it you’re just like, ‘Yeah, alright. Maybe I can carry on!’ I never thought that this would all happen, in a million years. I thought I would just end up being big in my area.

You’ve certainly come a long way. Okay, let’s talk about your inspirations. Who inspired you, musically, as you were growing up?

I went to the same school as Kano, not when he was there, but I used to walk past his house on the way home – he doesn’t know this (laughs). But people like Kano, Wiley, Roll Deep and a few others; they were big inspirations, because when I was young and when Channel U (now Channel AKA) was still big, it was a very exciting time for grime. In recent times, and it may be because I’m involved in it, it’s not as exciting as it used to be before. Sometimes I hear some of these MCs and their bars are dead, but I used to see them on the TV before and think, ‘I want to be like you.’ There are a lot of people that inspire me now; it goes without saying that the whole UK music thing is doing a lot at the minute. In all the different genres, there are people doing well. You’ve got singers like Adele and Jessie J and then there’s people like Tinie Tempah, they’re all doing big things. I think the scene, as a whole, is very inspiring right now and it’s a great thing to be a part of.

Yeah, the UK scene is extremely healthy right now. Exciting times! So, what was it about grime music, in particular, that made you want to start making it?

I grew up around it and I just relate to it more. I like rap and I listen to a lot of it, but I can go and stand in the same place as where ‘When I’m Ere’ was shot and it’s not out of touch, as opposed to rap. I’m never going to be seeing people driving around in Escalade cars with rims and all of that.

(Laughs) Talking of rap music, the UK rap scene seems to be blowing up at the moment. What are your thoughts on it?

It’s a funny one. Concerning the people I rate, I rate people like K Koke and there’s quite a few others, but I’m one of them people that likes to listen to music for the message, and sometimes there isn’t one in that type of music. It’s just all about guns and it’s quite boring when everyone is doing it. When Giggs had just come out, it was a totally new thing. Sometimes, the reason why I can’t respect it as a whole is because in my area, I know people who rap and and when you look at them you would think, ‘I don’t want to be around him, he would do me in’, but the reality is they’re idiots and they just play football.

Grime, as much as we love it, a lot of the kids on road don’t really care about it. Certain people in the industry are trying to force it on me to make grime, but look at the difference between what grime is now and what it was before. No-one spits bars at the youth club anymore. No-one does that. But why not, though? All these kids are road rats; they think grime MCs are wet. I came into the grime scene last year, I wasn’t here before that, and I’ve come into it right when it kind of died out. At times, I just get lost. I do know that no grime MC has more hype than Sneakbo right now, though. I’ve realised that you can’t carry on entertaining one thing. It took me to look at certain people who chat a lot of rubbish on Twitter to realise that you can’t entertain certain things.

Let’s just go back to ‘Average Kid’ for a second. I won’t lie to you, Max, I really didn’t expect you to bring out a tune like that. It wasn’t really you, was it?

‘Average Kid’ was as far out as I’ve gone with my music, maybe for a second I lost myself and forgot what I was about. When you’re in this position, you have to think about the management, people on the outside don’t really realise that. This is about your life and if you want to do music, you don’t want to fail and have to do something else. I hate myself for doing that tune; it was a step in a different direction and it made me explore something that I hadn’t touched before. But the new stuff is not what people are going to expect, because everyone thinks I’m going down the ‘Average Kid’ road. The new stuff is not soft, that’s the most important thing.

And lastly, what do you think you can bring to the current grime scene and what are your future plans?

I can do tunes like ‘On The Low’ and I’m trying to literally give people something to think about when they listen to my music. I want to touch people’s emotions. In general, grime gets to you and you bop your head and go mad, but I really want people to get lost in their emotions when they listen to my music. I know that I’m young, so I know what teenagers go through, because I am one. But I feel that half of these teenage MCs, instead of looking around them and realising that they have a lot to talk about just from personal experiences, family life etc., they just talk about being the best MC. I want to be that person who has a story to tell. People will like you more when they think they have something to buy into. As much as I know what I want to do, you have to play the game right and get the right singles, so at this precise moment, that’s what it is all about. That’s what the scene is like at the minute, it’s not as straightforward as doing the music that you like and it doing it big. Sometimes you’ve got to sway left or right. Not saying that I would do a tune that I don’t like, but I have to open myself up to new things.

Just keep doing what you’re doing and I’m sure with your new label situation, and with Mr Shabz (London Boy Ent) as your new manager, you’ll have the creative freedom to make the type of music that you want. I’m going to come to the studio one of these days and see what you’ve got cooking…

I was meant to invite you and some other people to the studio. I feel like I need to know what people like you think, as much as I can think that it’s a nang tune and get myself gassed up by people in the studio who are naturally going to say it’s a good tune, I need to know what people like you are thinking. Now that I’m with Jamal and Shabz, it’s much more likely to be planned. Whilst I’m still celebrating the deal, I think I’m going to get a couple of people down, get them smashed and just let them listen to the music. I feel like I’ve stepped it up. The music is also more artistic now, much more musical.

…Maxsta then decides to interview me

But what’s poppin’, JP? What are you listening to at the moment?

You know what? I listen to UK rap a lot more these days. I can’t remember the last grime mixtape that I really got myself stuck into. I’m just being real…

Yeah, I hear that. I was meant to ask you this a while ago too, but what did you think about Ghetts’ send for the panel?

(Laughs) I actually liked the tune, but if it took that show to get him to make something like ‘Who’s On The Panel’, then it’s a good thing and it has worked in his favour.

There was so much politics surrounding that list. I’m not even going to go into it right now, but all I can say is that there were a few other MCs on the original list and certain people on the panel – who didn’t even show up for filming – weren’t too happy with the final list, hence all of the changes. A lot of sly movements took place, but that’s the music industry for you…

What I’ve learnt from this industry is that it’s f****d. It can’t be like this in America…
This also appeared over at The Independent: H E R E
Posted by Joseph 'JP' Patterson at Monday, April 04, 2011