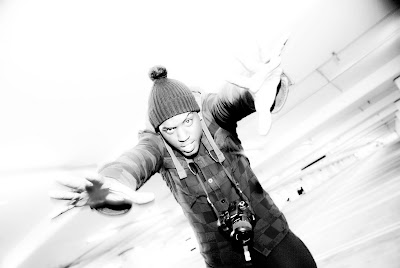 Bassline, as a genre of music, has been around for almost 10 years now and it hit its peak around 2007 - when T2 took it to the charts with his No.2 smash – ‘Heartbroken’. Fast forward a couple of years; and the bassline scene has managed to remain relevant to its core audience by forever re-inventing its sound. Whether it’s Swifta Beater sharing his fascination with alarm bells, or DJ Q showing some appreciation for church organs - bassline music has gone on to become a staple part of the Midlands and up North dance music scene.
Someone who has been consistent with his bassline releases over the years is Wolverhampton-based producer, TRC. Not only content with dominating the bassline scene with his vocal-led productions, he’s also attacking the grime scene - bringing that much-needed dance element back into it, alongside contemporaries - such as Royal T, Swindle et al. Joseph ‘JP’ Patterson caught up with the producer, sourcing a mix of TRC’s persuasion in the attempt to find out more about the blossoming producer…

TRC, please introduce yourself to the fabric crew…
My name is TRC and I’m a 22-year-old UK music producer from the West Midlands. I’ve been making music ever since the age of 16 and always took a liking to UK garage, grime, 2-step, 4x4 and bassline from a young age. I've also been a DJ since the age of 12.
You’re something of a veteran then… Okay, so tell us how you got into producing…
I never really studied it at school, so most of what I know is self-taught or by some of my friends giving me a few pointers. I used to watch a few of my friends make beats on Reason and thought maybe I could give it a go and snatched my friends copy (laughs). I guess it started from there, really.
I first came across your music from attending bassline raves. Whether I’d be at AS IT IS TV in Coventry or Niche in Sheffield, your tunes got played on almost every single DJs set. But, what was it about the bassline sound that initially made you want to start making it?
[Laughs] If I’m going to be totally honest, one of my best friends - DJ Apostle - spoke to me at the time when I was a grime geek and said, ‘You need to start making this.’ I was a bit baffled at first, but then I started to like it and started playing it on my sets - when I would play out in small clubs in town - I was 17 at the time. Not long after that, I gave it a shot on the production side and came out with my first big track, 'Break Up VIP', which kind of made everyone’s heads turn in my direction.
I find it really disheartening when people from the bassline scene say that it’s dead, or dying out. I just think it’s a genre that is forever changing; people just need to keep up. Do you think bassline is dead?
I don’t think bassline is dead. Everything has a full cycle and there just isn't that much structure to the scene. There were a lot of personal issues and arguments amongst some of the people involved, from producers and promoters, DJs to singers. After the mainstream hype, it kind of took everyone on a rollercoaster ride. I think that with some time and a few big sing-alongs to catch everyone’s ears, it will pick up again in no time.
Bassline aside, you seem to be making a name for yourself in grime these days. I was blown away by Trim’s recent vocal over ‘Skipping Rope’…
Thanks bro. Yeah that came about through Elijah and through Butterz. I'm getting there; I’ve got a lot more to come, just trying to get as many vocals out now as I can. I've had a couple instrumentals floating (‘Oo Aa Ee’, ‘Skipping Rope’, ‘Bandit’, etc.) and have had a lot of support from big DJs, such as EZ, DVA, Spyro, JJ, Q, Logan Sama and more, so you should hear a lot more from me soon.
Yeah, you work closely with the Butterz mandem, don't you? How did that all come about?
After 'Oo Aa Ee', I had a chat with Elijah and decided to come with the Butterz vinyl release of it - along with ‘Skipping Rope’ and ‘My Empire’. That kind of got the ball rolling with me and Butterz.
OK, so what kind of sound can we be expecting from TRC in the future? Is there any specific genre that you can see yourself sticking with?
Everything! I'm trying to tap into all genres right now, but you'll be hearing a lot of grime and bassline, maybe a bit of garage too!
Interesting, interesting… Lastly, what can people expect from you in times to come? You’ve already released a 100-track instrumental mixtape, which did really well. Are there anymore mixtapes or big collaborations in the pipeline?
Collaborations… I'll let them just unfold. I've got another grime EP coming out in April and I’ve just started putting together my first mixtape for this year. Gonna have to keep everything else boxed for now and let the music do the talking!
Download: TRC's Grime Vs Bassline Fabric Blog Mini Mix
Tracklist:
Miss Fire & TRC - Drive Me
TRC - Oo Aa Ee (Royal-T Remix)
P Money - Left The Room (TRC Baboon Remix)
TRC - Into Sync
Trim - I Am (TRC Skipping Rope)
Trilla - Box Up A Yute
TRC - Bandit
ZeO Vs DJ Q - CandyShop/Its Goin Off
TRC - Elevate Myself
Stormer - Bogul Freestyle (TRC)
Spyro - 8 - 10
Macca Vs TRC - Spaceship Anthem Bassline Remix
Burgaboy & Reikz - Fuck Da Police
Raider - When You Hear This One (Teeza)
TRC - Oo Aa Ee
Trilla & Pantha - Rub A Dub
Paleface Vs Abbee - Dirty Little Secret
Teeza - The Set Up
Stormer - 100 Bags Freestyle (S-X)
Zoe & TRC - Playing With Fire
This also appeared over at Fabric London Blog: H E R E
Posted by Joseph 'JP' Patterson at Monday, March 14, 2011