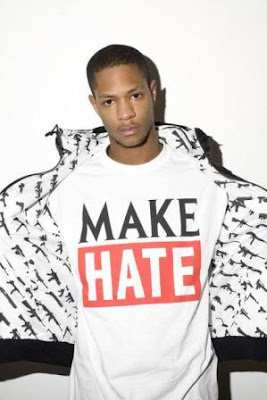 We caught up with 19-year-old east London-born grime MC Griminal to talk to him about his new deal with major record label, Universal.

The rising star, who has worked with everyone from Wiley, Chipmunk and Scorcher, has now reached a place in his career where he’s happy, but he has a dedicated group of people around him to thank for that.

He told us: “I've got a strong group of people behind me right now showing a lot of support and guiding me every step of my career. I try to show my appreciation for those people at any giving opportunity. As well as that, I just keep going, I won’t stop!

"There were talks about me being signed for a while now, but it was only a week ago when I actually signed my first deal, so I’m just happy to finally be here. I was so excited that my hands were shaking before I signed the dotted line (laughs)."

Whilst Griminal has gained a lot of new fans, many of his original grime fans are now claiming that he has left the underground scene to make mainstream music, but that isn’t the case Grim says:

“To those who say I don’t do grime anymore, the proof is in the pudding. ‘Grimsom II’ is out and the majority of that is grime. The 'Jump' video featuring my brother Narst and protégés Shrimpos and Tiny has been filmed and will be premiering in the upcoming weeks on Channel AKA and that is grime at its best. We got back in the studio with Nocturnal (the producer of 'Dont Phone Me' and 'Skaadoosh') and made another one."

He added: “So if you do like the 'grime' Griminal, then those are just a few things to look forward to from myself. Besides that, now I've signed this deal, I really need to focus on getting some hot singles and a smashing album recorded and handed in, so that is definitely my main focus right now.

"On my album you can expect the best music from me ever. I'm really going to challenge myself and just hope that all my fans and supporters appreciate this piece of work that I’m putting together. It’s going to feature music that has a broader appeal so that it can reach a wider audiences, but you can still expect to hear that original authentic Griminal that everybody seems to like (laughs).”

Grim put together a free EP and released it via his Twitter yesterday for all of those grime fans.

Grimsom II sees the MC go back to his grass roots and proves that he is still on top form when it comes to grime music.

This also appeared over at MTV: HERE
Posted by Joseph 'JP' Patterson at Monday, October 11, 2010