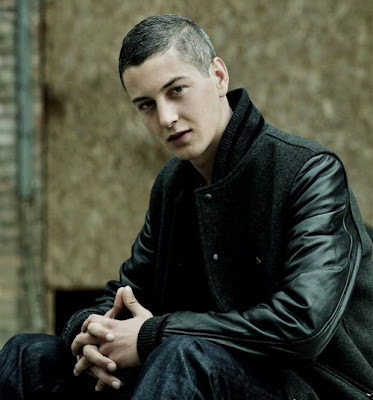 Dagenham-born Devlin has had an amazing year so far after being snapped up by Universal Records.

He told us: “I can’t believe the speed of things and how fast things have really picked up. It’s crazy, too much to comprehend really. I’m just enjoying myself and doing what I’ve always wanted to do.”

With new single Runaway due for release October 24, Dev doesn’t seem to have any ladies running away from him at the moment, quite the opposite actually:

“A lot more ladies are looking my way now (laughs). It’s all good! I mean, I’m a red-blooded male, so I can only but enjoy the attention.”

Devlin has been compared to every white rapper under the sun, from Eminem to Asher Roth (we're sure he’s glad that he hasn’t had the Vanilla Ice one yet), but does he find it a compliment?

“Eminem is a genius, so I can only take it as a compliment. But I am my own person at the end of the day, I’m Devlin and I’m doing my own thing, but still putting me in the same category as someone like that will always be a compliment.”

With the likes of Skepta, Scorcher and Tinie Tempah, the UK music scene is looking healthier than ever right now, but what are Dev’s thoughts? Are there any future contenders?

“The scene is really healthy at the moment. A lot more people are breaking through and there’s a lot more opportunities for people now. My boy Griminal was signed just the other day and a lot more of the young talent are coming through and getting signed. Everything is looking strong right now.”

There does seem to be some confusion when putting Devlin into a category. Is he a UK rapper? Is he a grime MC? This is a subject that is quite controversial with fans of the underground genre:

“I don’t even like to put myself under any genre. I’d just say that I’m an urban music artist. I’ll make grime, I’ll make rap, I’ll do anything. I came from the grime scene and I will always do that music, but at the same time, I’m an artist now and I like experimenting with different types of music now. Urban, I just make urban music.”

With a new album entitled Bud, Sweat & Beers due for release soon, it sees Devlin team up with one of the main guys at the moment, Labrinth, along with some of his old friends:

“I’ve kept it really in-house, but I’ve done a lot of work with different producers, such as Labrinth, Futurecut, Naughty Boy and a few of my boys. MC-wise, we kept it in the family really, I’ve got my good friend Dogzilla on there and also Ghetts and that’s it really, well along with a few singers as well. The majority of the album it’s just me doing my thing really.”

Devlin seems to have his head in the right place at the moment and is focused on making himself a name to reckoned with on the UK music scene and as he explains: “I want to sell as many records as possible, do as many gigs as I can possibly do; I just want to do everything. I just want to sell my music and earn some money, because this is what I love doing.”

This also appeared over at MTV: HERE
Posted by Joseph 'JP' Patterson at Monday, October 18, 2010