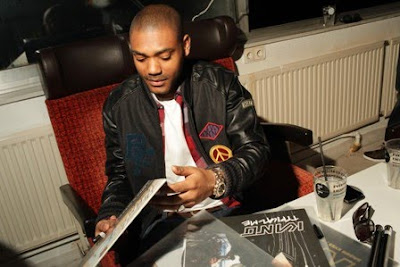 Kano, so you’ve been away from the music scene for a little while now. I know what you’ve been up to, but can you just update the fans on what’s been going on in your world?

I’ve just been recording and working on the album. When an artist is away it usually means that they’re doing the most amount of work, so I’ve just been in the studio creating new music and new sounds. Other than that, I’ve just been touring, I’ve been all over the world doing shows, whether it be by myself or with the Gorrilaz. Loads of things…

You’ve worked with a lot of different artist on the new album, ‘Method To The Maadness’, from Vybz Cartel and Boyz Noise, to Wiley and Ghetts. Why did you choose to work with such a range of people on this project?

Those people were people whose music I liked listening to and I’m really happy that I got to work with a lot of my favourite people. Whether it be Boyz Noise, Diplo, Vybz Cartel, Ghetts, Wiley, Damon Albarn, Hot Chip, Chase & Status, there’s just a great cast of people on the album. It’s all people that feel my music and I feel their music, it’s not just collaborations for the sake of collaborations. You both have to want to be there, you both shouldn’t be afraid to step out of your comfort zones either. When I was working with these people, you could clearly see that it was something different for me - and something different for them also. Personally, I think that I came up with some of my best material with this one.

So what would you say your favourite track from the album is? I think ‘Crazy’ would have to be mine…

[Laughs] ‘Crazy’, yeah? Well, my favourite tune has changed so much throughout the recording process, but ‘Crazy' has definitely been one of them. As soon as I made that I definitely knew that it was the one. ‘Lady Killer’ and ‘Spaceship’ are also some of my favourites.

You worked with some of your old grime friends, Wiley and Ghetts, on the album. How was it getting back in the studio and working with them again?

It was really good. I didn’t get in the studio with Wiley, we made the beat in Berlin and then went to Kingston, Jamaica, to get Aidonia on it and I then sent Wiley the vocal. As soon as I did it, he just sent me it back with his part. That’s what was good though; the suspense to see what he was going to do on it. Ghetts, we got in the studio for that track we did together, it was produced by Hot Chip so we went over to Joe’s studio and recorded that. It’s always good to work with Ghetts, he’s someone who I’ve worked with throughout the last couple of years and the chemistry is still there, and we still have the same passion to make some of the best songs that we can. He’s also someone that I will be touring with in September/October; he’s just one of my good friends.

Talking of grime, do you still follow the scene? If so, is there anyone that you’re rating at the moment?

Definitely Maxsta, I like him. He’s someone that has passion and I haven’t seen that in a little while, I just think that the way he puts his words together is great. I listened to ‘The Maxtape’ and I heard some great potential from him as an artist. Some of the choruses that he’s putting together shows that he’s very advanced for the age that he’s at. I think he’s one to watch.

I always ask grime MCs who have gone on to make commercial music whether they miss the old grime days or not. You know the times when you’d go to an Eskimo Dance and get like 100 reloads on a set?

I definitely miss it! Not to say that I’d want to be doing that right now, I just think that it was something that was so fit for that time, something that you can’t really re-create. You would’ve had to have been there to experience it to really know what it was about and understand the culture. Back then, we didn’t know where it was going, we didn’t know that it was going to grow to be something as big as it is now and there’s something pure in that. I definitely do miss those days, they were some of my best times in music, man. Them raves there…

You’ve gone from being signed to a major record label, to releasing your music independently. How would you say the two differ from each other? Do you have to put a lot more promotion and effort into selling those units now?

Put in more money, that’s what you mean [laughs]. You’ve always got to put money in, but it’s not always your own money [laughs]. But yeah, I’m on an independent with Bigger Picture Music and there’s some great guys over there. When it comes to recording an album you might be like, ‘Yeah I wanna record a song’ and then you might want to go over to Jamaica and do it and that’s cool, but you don’t really see the money that’s being spent when you’re on an independent, you’re still doing the same things as if you were on a major. Obviously I just have to do some things out of my own pocket, I’m 100% willing to fork out money for my music, I’m certainly not gonna lesser the quality because I’m independent now. All the creative things that I’ve ever wanted to do I can just do them, no one can tell me anything. I just have to put my money where my mouth is and make it happen.

If you were offered another major record label deal, though, would you take it?

Well, right now, I definitely like being independent. I still get offered loads of deals, but it has to be the right one and it has to be the right home, but that right home can also change in the next couple of years. I’m not saying that I wouldn’t ever partner with anybody, I just wouldn’t sign deals like these new artists are signing - 360 deals, where the labels are making money from your touring. I’m not into none of that.

OK, so what can people expect to hear from Kano for the rest of 2010, next year and beyond?

The rest of the year is going to be very, very busy. As I said before, I’ve got the single and the album coming out and I’ve got a big showcase at Bush Hall on September 1, which will be full up of my new music - that’s sold out I think, though. I’m also going on tour from the end of September and into October, so look out for that. Then I’ll be going on tour with the Gorrilaz in Europe, America, Australia and a UK Arena tour too. I’m gonna be all over the place, man!