MTV: Wrap Up And Watch Out: J Beatz 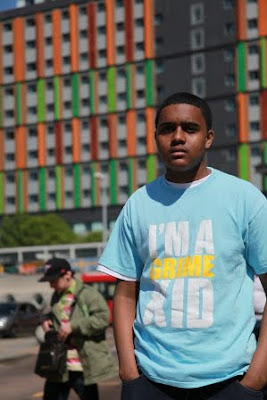 My name is J Beatz and I'm a 17-year-old grime producer from Enfield. I've worked with the likes of Devlin, Revolver, Badness, Frisco, Bloodline, Sharky Major and more. I'm about making energetic and powerful grime music made for the clubs and the ravers and just making good music in general.

I got into music when I was 13 by watching my older brother, who was a hip-hop producer, making beats on Fruity Loops 3 and I thought it looked fun so I gave it a go and I haven't stopped since. The people that inspire me today are the producers in the grime scene that are going hard. For example if I hear a banger from Teddy, Rude Kid, Royal T, Nu Klea or Teeza, it makes me wanna open Fruity Loops and make a banger, it drives me to get better and be consistent because I know there's so many good producers that if I start getting complacent I will just fade away.

I'm a grime producer, but I've also made other music such as dubstep, hip-hop, R&B, UK funky, even pop. I make music which I listen to and grime is what I listen to the most but I also listen to other music, so I like to experiment in different genres and styles and try other things as well.

I'm from London, so when I see people at events and studios I can just network, but it has been difficult to get to where I am because when I started doing music I knew absolutely nothing in the industry and I've had to build contacts on my own from scratch. I've also got to where I am due to hard work, constant networking over the years and making good music, so I was bound to be heard eventually.

My plan this year is to work with more top MCs, push the EP's I got coming out on different labels, showcase my DJ side and get my profile up. I'm also thinking about doing an instrumental CD and releasing it in the first quarter of 2011, but I'm gonna see how this year goes and then think about if I'm gonna go ahead with it or not. I also wanna work with some singers and get them on some hard grime beats to make a nice balance with the hard beats and the smooth vocals and push them as singles instead of making moist pop tunes to have commercial success.

Stay up to date with J Beatz on MySpace and Twitter