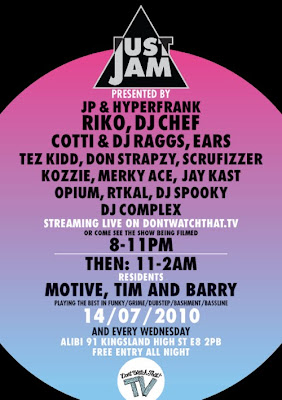 Each and every wednesday streaming LIVE ON www.dontwatchthat.tv 8- 11PM - or come see the show being filmed FOR FREE!!

Music journo's, Joseph 'JP' Patterson and Hyperfrank, have come together with Tim & Barry to put on an epic event for JUST JAM this coming Wednesday. They've handpicked some of the people who they feel are the future of the underground music, as well as a few names you may have heard before...

RIKO
Riko is also making a comeback to the UK underground music scene. After making his name as being one of the mian MCs in popular grime crew Roll Deep, Riko is back to to bring his uniqe style, flow and energy to grime and dubstep.

DJ CHEF
DJ Chef is one of the biggest DJs on the dubstep music scene. With a regular show on Rinse.FM, this guy has created a dedicated following and can be seen playing at some of the biggest club nights around the world.

EARS
After leaving the infamous grime crew Neckle Camp a few years ago, Ears is back. He’s recently been touring worldwide with dance music duo The Count & Sinden and now this MC is about to hit everyone with his new look and sound.

COTTI & DJ RAGGS
Cotti has made some epic dubstep bangers in his time and he’s not a bad MC and DJ either. He will be teaming up with his mate DJ Raggs on a b2b special.

TEZ KIDD
This MC from Sheffield (up North) who goes by the name of Tez Kidd, is a very well known name on the bassline scene and was infact one of the first ever to spit on the genre. He’s now got some hip-hop and grime fire under his belt, will be interesting to hear.

KOZZIE, MERKY ACE, RTKAL, OPIUM, SCRUFIZZER & JAY KAST
These six MCs are the future of grime. There is no more to say on the matter. Watch out for the epic set they're going to do on the night!

DON STRAPZY
This south London rapper is becoming known as thee one to watch out for when it comes to hip-hop.

SPOOKY
Making his name as a DJ for grime outfit Slew Dem (Tempa T et al), this DJ and producer has murked many a ChockABlock rave and is dedicated to the sound of grime.

DJ COMPLEX
ChockABlock resident DJ Complex will be tearing it down as per usual. Watch out for an epic Wiley set on the night too.
Posted by Joseph 'JP' Patterson at Monday, July 12, 2010