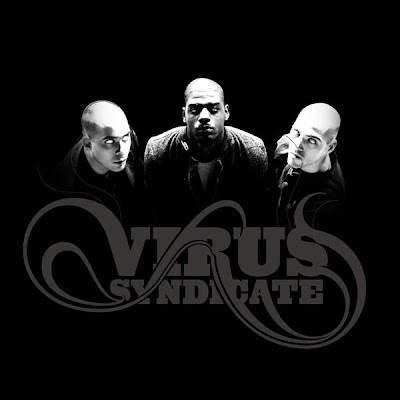 Manchester-based ensemble Virus Syndicate, dabblers in hip hop, grime and dubstep, are comprised of three MCs – JSD, Goldfinger and Nika D – and the DJ/producer MRK1. Earlier in 2010 the group embarked on an American tour, which called at both South by Southwest (SXSW) in Austin and the Miami Winter Music Conference, so the signs are that they’re looking to take their career to the next level. The Breakout Trilogy marks their next step forward.

For the Music is a great opener, reggae vocals on the chorus complementing lyrics from the three MCs over a heavy dubstep-influenced production. Indeed, so catchy is the track’s chorus that the number’s saved from the somewhat samey flow from the MCs, which might otherwise have blighted this collection at its outset.

Believe is a very mellow hip hop/dub track, which explores issues of trust and faith. The topic of being let down is always good subject matter for any album, and it’s articulated well here with female RnB vocals adding something special to an already admirable effort. But I’m Here is good for only one thing: its beat. Lyrically it’s all braggadocio, a too-common trait amongst underground rap artists’ mixtapes, and the weak production is an echo of grime/dubstep from around 2005/06, before the styles broke the mainstream.

Talk to Frank is a standout, finding the Syndicate waxing lyrical about MDMA, cocaine and their drug of choice, weed. Another recommended cut is the hilarious Move It, which samples the legendary Reel 2 Real track I Like To Move It: essentially it’s all about dancing the night away and having a bit of fun, irrespective of your daily troubles.

Despite its inconsistencies, The Breakout Trilogy is more of a delight than not. The dubstep and grime tracks suit the MCs’ hip hop style and flow well, and even if Virus Syndicate don’t stage an assault on the mainstream, this will still go down as a quality underground album.

A version of this also appeared at BBC Music: HERE
Posted by Joseph 'JP' Patterson at Thursday, May 06, 2010