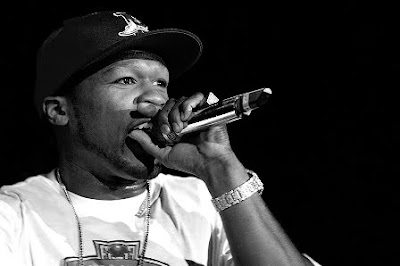 So it was 5.30pm on Friday afternoon and I had an email come through to my inbox saying that there was a couple of press spots at the 50 Cent concert in Birmingham and seeing that it was to start at 7.00pm and I lived 100 miles away from the venue I had to rush. Anyways, me and my friend hopped in the whip and made our way to the LG Arena doing 120mph down the motorway and we got there at like 7.45 and we made our way in. Got to the door to collect our “press passes” to be told that there was no actual press area (I was baffled at this point) and that only 4,000 people bought tickets when the arena could hold up to 15,000 (I was even more baffled at this point), so I made my way to my seat which was like 100 stories at the top of the arena, I wasn’t impressed at all and yes I was on some Mariah Carey diva/power trip...

Skepta was a supporting act for the show and he had just finished his last verse of his latest single ‘Bad Boy’ by the time I had reached my seat, but I’ve seen Skeppy perform many a time so it wasn’t a major loss, although he had the crowd going hysterical by the sounds of it. 15 minutes later Fiddy entered the stage and he had his Cody Lloyd Banks by his side and the crowd went ballistic. All types of people were there and it was actually quite shocking to see to be honest, there were 9-year-old white kids, to 50 year old Jamaican folk screaming for 50 like they just saw Jesus, or someone of that calibre.

The first track that Mr. Jackson performed was ‘Candy Shop’ and that got the crowd on a hype and everyone was in sing-along mode, women were throwing bras on stage and all sorts (I’m not actually lying), it was quite a spectacle. 50 then went into hits such as 'P.I.M.P' and 'In Da Club' (which brought back some memories) and then he slowly got into tracks off his latest 'Before I Self Distruct' album with 'Do You Think About Me', 'Baby By Me' et al. To be honest the show was a bit samey throughout with 50 flexing his chest like some page 3 girl all night long and waving one hand in the air in the same motion, there was nothing spectacular about this show, but when ‘Many Men’ came on I did have to get up and show my appreciation for the tune as that is possibly one of my favourite hip-hop tunes, like ever, the lyrics are so relevant in so many ways. I liked the way he had a live band though, it did add that extra bit of effort.

If I had any advice on how 50 could better his live shows (not that he will ever read this or anything) I would say that he needs to go to a Lil Wayne concert (when he comes out of prison, of course) and see how his shows are, they’re exciting, there’s mad amounts of energy and even down to the graphics used are on next levels. It was like he was rapping on road, but instead he was in front of thousands of people, but I’m not one to hate, because in all fairness I’m not the one going back home to a huge mansion and Bentley am I? AM I? NO!

This also appeared over at MTV: HERE
Posted by Joseph 'JP' Patterson at Monday, March 22, 2010