MTV: We Go There With Giggs! 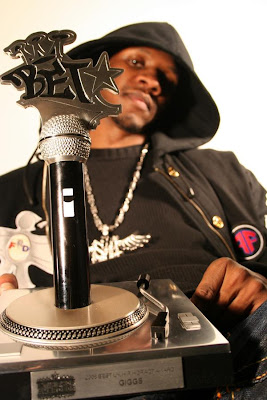 UK rapper, Giggs, has had a great couple of years with his underground anthem, ‘Talking The Hardest’, alongside selling thousands of copies of 'Walk In The Park', and more recently getting snapped up to XL Recordings, home to M.I.A and previously Dizzee Rascal.

“Being signed to XL is all good,” Giggs told The Wrap Up. “Everyone down there is cool and helpful and I feel like I’ve got a lot of support behind me on the work side of things.”

Hollowman’s latest single, ‘Don’t Go There’, featuring Atlanta R&B singer, B.o.B, has been doing the rounds recently on mainstream radio and TV alike, so can we finally get to see UK rap get that long awaited chart success?

“I don’t mind how it does, as long as I know that I did everything in my power to make it do as well as it can do. But a top 40 wouldn’t hurt [Laughs]. It’s all about the album though, ‘Let Em Ave It’, which is going to be out around May/June times and there is going to be a single just before that, but that’s under wraps at the moment.”

Stay up to date with Giggs on Twitter – www.twitter.com/sn1giggs

This also appeared over at MTV: HERE
Posted by Joseph 'JP' Patterson at Tuesday, February 16, 2010