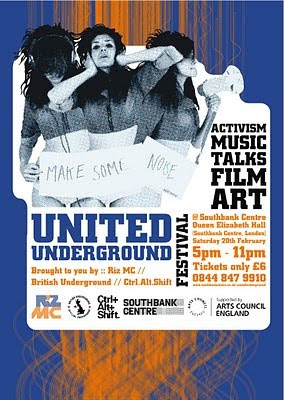 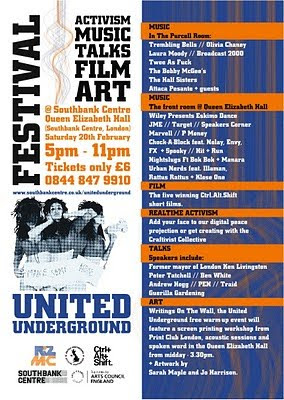 The day after my grime vs fashion event at EGG, ChockABlock will be hosting a room at United Underground at South Bank on Saturday 20th Feb. Yes that does say Eskimo Dance on the flyer, it returnssssss!

Some blurb on the event from Chantelle Fiddy...

A non-profit music and awareness showcase with a focus on conflict featuring Ken Livingstone, Trembling Bells and Wiley's Eskimo Dance

After a sell-out summer show in 2009, Southbank Centre, Riz MC, British Underground and Ctrl.Alt.Shift present the second UNITED UNDERGROUND event - a music and activism party at Southbank Centre's Queen Elizabeth Hall. Blending cutting-edge music, street culture, artwork and film alongside talks and Q&As with cultural and political risk-takers, the night will introduce exceptional new club and alternative artists and explores the potential of music as a catalyst for change, focusing on the issue of conflict.

Writings On The Wall is the FREE spoken word, music, and interactive art warm-up event for United Underground, open to all from midday-3:30pm in the Queen Elizabeth Hall, featuring screen printing workshops/showcases led by Print Club London, alongside a live showcase of some of the most exciting unsigned music acts and spoken word artists. Featuring Rhymes Won’t Wait Collective, and Fringe First Winner Inua Ellams and Poejazzi, plus acoustic sets by The Samantha Durnan Band, Pete McAllen and more to be announced.