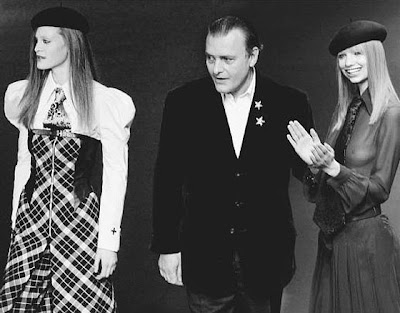 When we last spoke to madcap French designer Jean-Charles Castelbajac in the summer of 2006 he was just getting his feet wet in US waters, relaunching his eponymous line and talking vintage Castelbajac teddybear suits and TV on the Radio. Fast-forward about six seasons and the French designer is ramping up for the launch of a brand new label, JCDC—the nickname given to him by his grime buddies. UK-based journalist Joseph Patterson caught up with Castelbajac to get the scoop on the new line (apparently Ebony Bones will perform at the debut show at London Fashion Week). Read the full interview after the jump.

At this point you’re pretty much a fashion legend
I spent 40 years of my life creating accidents, bridges and meetings between antonymic universes, making experiments in every field including fashion, music, art, writing and images. For a long time I have been considered with suspicion because of my diversity and my difference. The 21st Century is my era and thanks to the internet there are no more boundaries, but a global vision.

Tell us about this concept of Cartoon Couture?
For many people cartoon is related to Pop and Kawaii. My use of cartoon is slightly different. With my new line JCDC, I’m currently working with Trey Parker et Matt Stone (South Park) and ever since the day Jefferson from Dazed gave me the title King of Cartoon, I have been invited many times to Buckingham Palace to discuss grime with the Queen.

On the subject of grime, would you say that your work is inspired by music? UK grime MCs gave you the name JCDC and you have a new line soon called JCDC.
It’s very touching to know that a resisting community embodies my work. During my exhibition at the V&A exhibition, I met Tim & Barry who introduced me to the Slew Dem Crew, Tempa T, Dizzee Rascal and many others and they called me JCDC. We recently went to Athens with Tim & Barry, Tempa T and Carri ‘Cassette Playa’ Munden for a performance. Tempa is my friend! London has been always generous and inspiring to me, since my exhibition in the V&A museum, Tim & Barry and young grime MCs would call me JCDC and it is now my war name to bring to a young generation. I call it low cost luxury and next London fashion week we will launch the first JCDC collection and it is a bomb. ‘Not for sale’ is the motto of this line, like the upcoming kids!

Do you think music influences fashion, or is it the other way around?
Vivienne and Malcolm achieved the climax of the twin energy of music and fashion with the Sex Pistols in one opus and a perfect visual concept which still inspire young designers. Fashion and music are fused together and accomplices, they are brothers of arms and together they can change the world. They are totally linked and today I work with amazing talents like Beth Ditto, MIA, Santigold, Rufus Wainwright and Ebony Bones who will be performing in my show. I cannot imagine my inspiration without music, I started to write songs for Mareva Galanter!

Tell us about your Triumph of the Sign exhibition, tell me about that?
Historically my work is based on turning around and appropriating signs of our era. I once made a coat for Iggy Pop with four pieces of art. Now with my artist status is I can operate and ask many questions freely!

Future plans?
The creation of a low cost luxury chain of hotels in which society and art can emerge for a very creative generation. And maybe next year a new exhibition at Paradise Row.

A version of this also appeared over at FADER: HERE
Posted by Joseph 'JP' Patterson at Wednesday, July 22, 2009