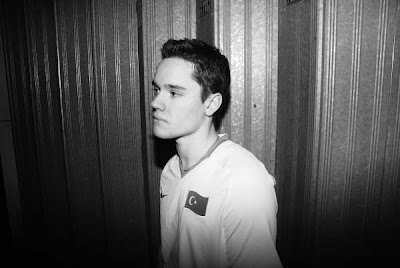 Logan Sama is the only 100% Grime DJ on legal radio and with over 50,000 listeners every Monday night and he is one of the authourative figures in the scene. We sat down to talk Grime and old age?...

How did you get into djing?
I started listening to underground music at a time when the only way to get the tunes was on vinyl. If you wanted the tracks you pretty much had to be going to your Uptown Records, Blackmarket Records, Release The Groove, City Sounds and Planet Phat every couple of weeks to get the limited press vinyl promos or wait like a year for it to get licensed and come out on CD. So after a while I had a bunch of records at home that I would just play on my Dad's hi-fi and make tapes of the tracks one after the other. One day one of my friends was upgrading from his cheap decks to some fresh ones and he offered them to me for £100. I went out and bought a cheap mixer for £40 and off I went into the world of DJing. If I was a young kid now, I probably wouldn't have ever got into DJing because it is so easy to download tracks on mp3 online.

Do you listen to anything else apart from grime music?
I listen to all sorts. Literally. In my car right now I have Max B CDs next to The Best Of Dean Martin. Allsorts.

How do you think the scene has done in its 5/6 years of existence?
I think given all the restrictions and hindrances placed on British Urban music, Grime has done well to survive, let alone progress. The scene is growing, artists are getting better known. English MCing is more and more accepted now without having to use American accents or slang. Grime is a culture and that culture is establishing itself a proper foothold now across the UK, not just London.

Do you feel that you are one of the key outlets for the scene to be heard at the moment?
I am the only 100% Grime show on legal radio, so naturally I will be the most important outlet for Grime music to be heard and promoted. Sometimes that's great, sometimes not so much. I have a lot of responsibility and am under a lot of scrutiny, and I have learned over my 3 years that you can't please all of the people all of the time. But looking at the status of the show and the growth of the music, I am proud of my achievements. And I'm still the best there is at what I do.

Can you see yourself djing grime when you’re 60+ ?
No. I see myself running the first dedicated Grime label within the major label framework. I don't think that my tastes and opinions would be relevant to a younger audience when I am chasing my pension. However I do smile when I think about playing tracks like Eskimo and Pow at parties full of elderly folk reminiscing, the same way our parents and grandparents listen to the music of their youth now. I just want to build a legacy for this music and make sure people know it has a history, not just one or two big tunes as a flash in the pan.

Catch Logan Sama every Monday on Kiss Fm 11pm - 1am

A version of this was featured in JD Sports Magazine issue 8
Posted by Joseph 'JP' Patterson at Wednesday, April 22, 2009